You are here: Home1 > Blog2 > Financial Planning3 > What is rebalancing and why is it important? 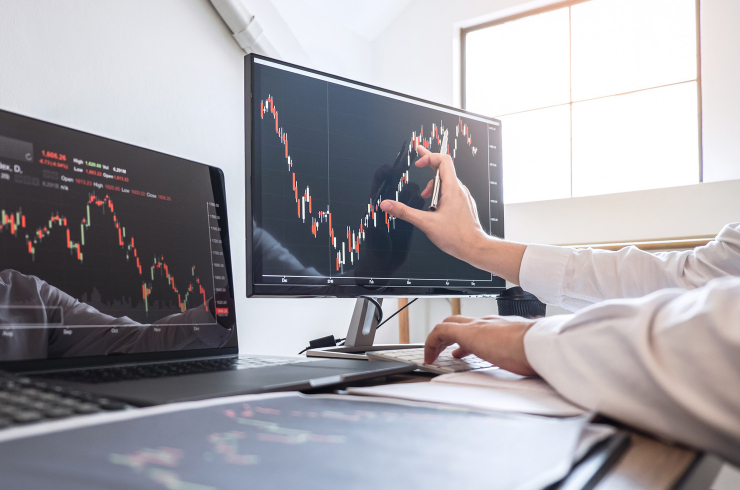 You’ve probably heard the term rebalance. You may even have a vague idea of what it is and what it is supposed to do. But have you wondered how it works, and do you know the right way to do it?

At its most basic level, the practice of rebalancing is intended to ensure that your portfolio stays within a predetermined allocation (i.e. proportion of stocks to bonds). It prevents you from getting overweighted in a particular asset, and ending up with a portfolio that has more (or less) risk than you wanted.

And at that level, it makes a lot of sense. If you have a level of risk that you are comfortable with, and stocks have grown faster than bonds, you probably want to take a profit.

No one ever went broke taking a profit, right?

If only it were that simple. You see, in many cases rebalancing isn’t just about selling risk assets (stocks) at the top to buy more conservative investments (or the reverse if risk assets have fallen).

What actually happens a lot of the time in automated rebalancing strategies is that certain risk assets are being sold to buy other risk assets. Well, that doesn’t necessarily reduce risk now does it?

Another way of thinking about it is that your manager sold your winners to buy your losers.

Well, why would a money manager do this? Because they have been convinced by the academic community that there is a justifiable reason to rebalance this way. And that reason is called mean reversion. 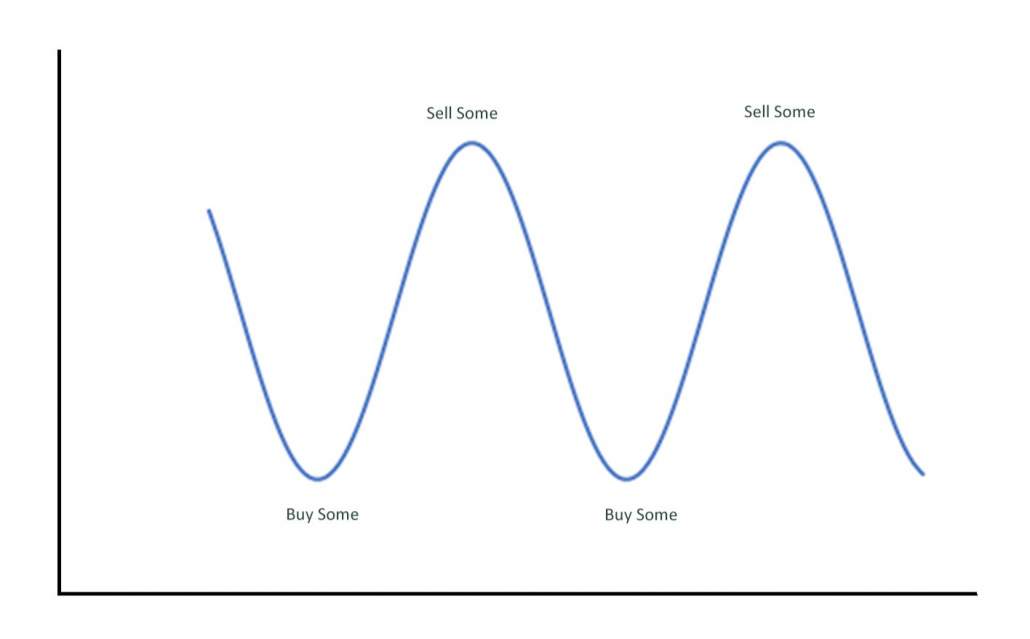 Simple enough in theory. Now all you have to do is find an investment that moves in the opposite direction of your first asset, make sure that they both have a long-term positive expected rates of return, and then you’re cooking with gas! 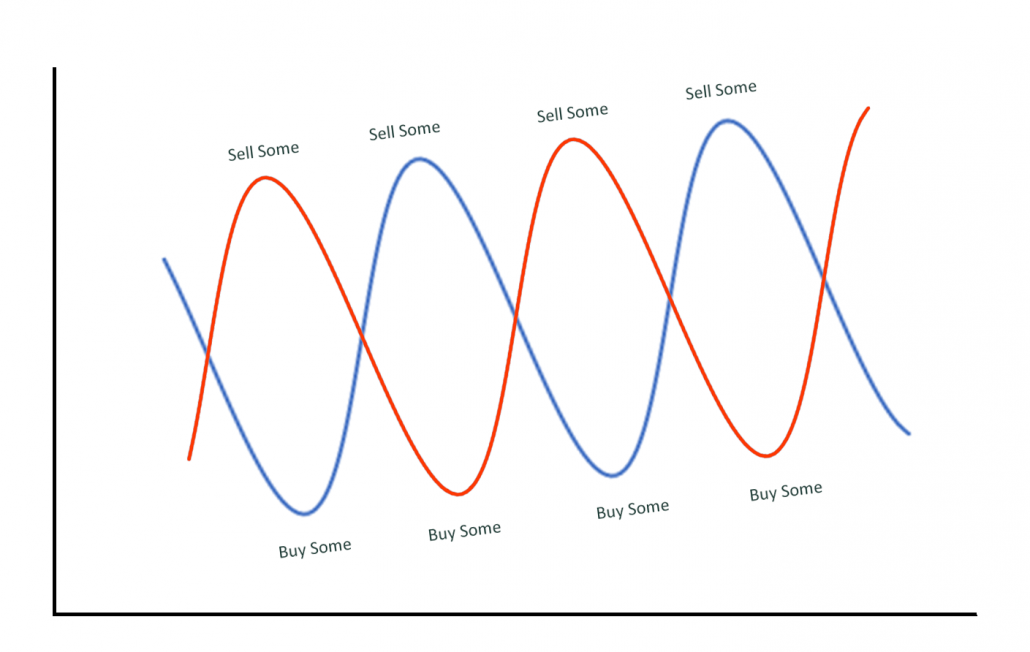 As a side note, there is rarely an investment that moves directly opposite and has a positive expected return, but the experts will tell you it doesn’t have to be perfect for the theory to work.

With this relatively simple assumption, you have justified rebalancing between your recent winners and losers. Not only have you justified it, but by doing it this way, many are convinced that you should expect to increase your return and reduce your risk. In other words, have your cake and eat it too.

In theory, this makes a lot of sense, but as Einstein said,

“In theory, theory and practice are the same. In practice, they are not.”

Here is a chart that shows the last 10 years showing different US stock market indexes that vary in size and style. They are the types of indexes that many managers use as diversifiers.

(It’s a bit of a jumbled mess, but just focus on the annualized returns in the legend.) 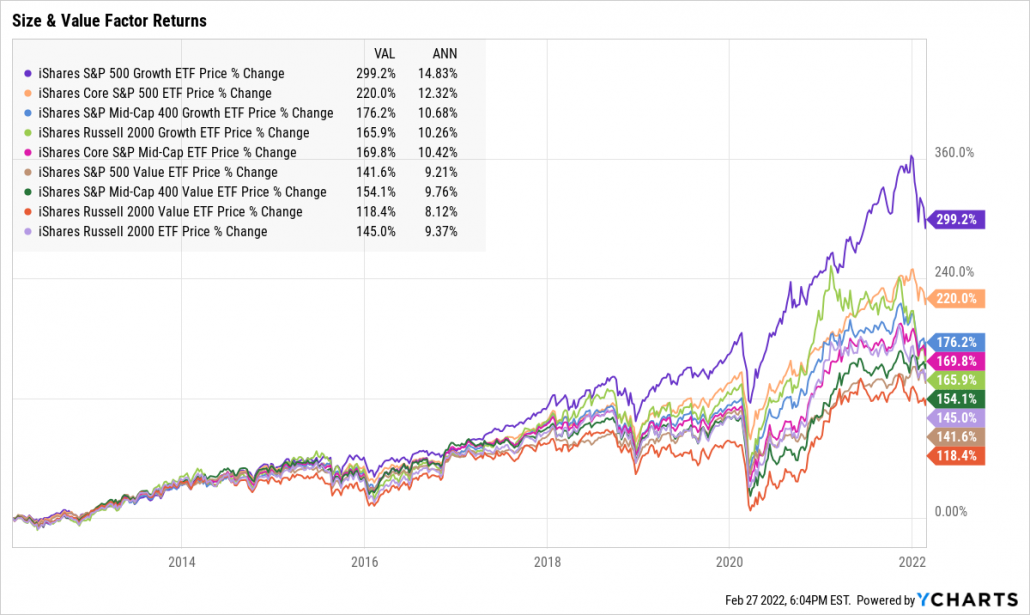 So, if your manager spent the last 10 years rebalancing your portfolio by selling large cap growth stocks (the ones that dominate the S&P 500) and buying smaller and value stocks, your performance was worse than if you did nothing and your risk (as measured by volatility) actually increased. That’s because small company stocks and value stocks have higher historical volatility, and as such, are effectively riskier than large company growth stocks.

What if your manager instead sold US and bought international stocks? 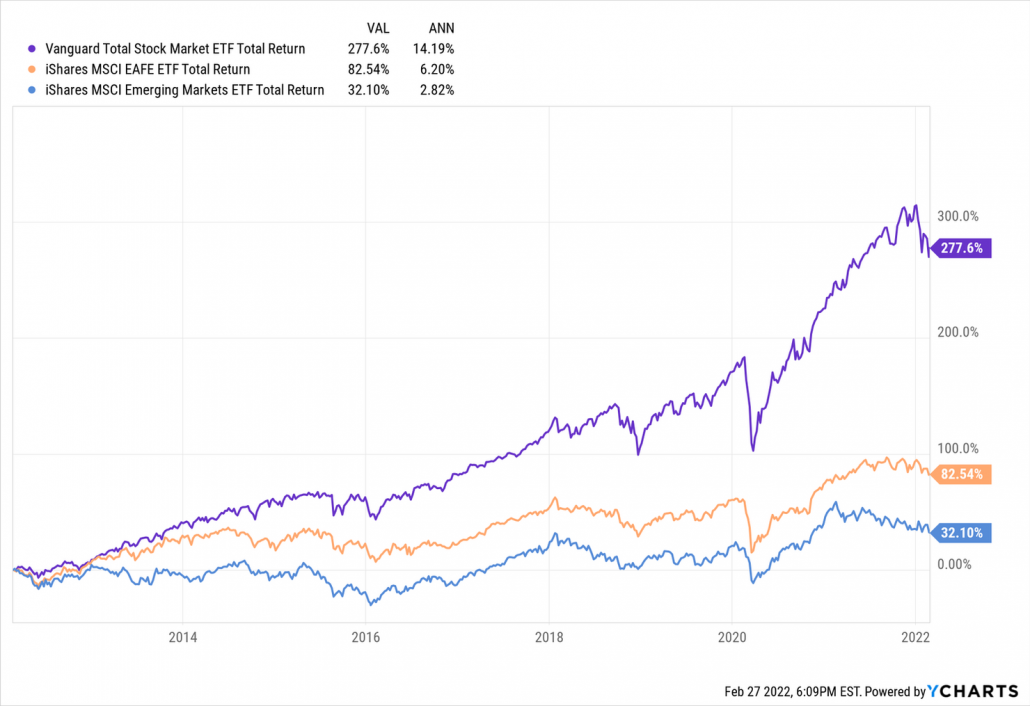 Effectively, you got the same result.

So while those in academic community would have you believe that you just need to wait for the outperformance to arrive, you have no way of knowing if it ever will.

How did the basic idea of rebalancing between asset classes became a thing? Financial theories are developed by reviewing past performance.

And while you’ve been told your entire investing life that past performance is not indicative of future results, that is all there is to go on. What financial researchers do is study the history of financial markets. They’ll tell you that they can review long-term patterns that go back hundreds or thousands of years (in the case of interest rates).

We can study medical care going back hundreds or thousands of years as well, but I’m not sure you’d want to use much of how Civil War battlefield surgery was performed for managing your health today.

Like medicine, the modern financial markets are relatively new. The S&P 500 was constructed in 1957 and back tested to the 1920’s. It didn’t actually become an investment until 1976 when Jack Bogle created Vanguard. The financial (interest rates/equities) futures markets didn’t start until the 1970’s, and it wasn’t until the 1990’s that index funds were given the authority to use equity futures to help them manage cash flows.

So while researchers can spend their career digging through financial history and data set to come up with reasons that something tends to work, they don’t have enough data to know for sure if it is really statistically significant or just blind luck.

At one conference I attended, a Nobel Prize winning economist told an audience that he just needed 400 more years worth of data to prove that the theory has validity. He was serious.

During an interview, the partner of this Nobel Prize winning economist told an audience regarding underperformance of their theory that 10 years was “nothing”. He said it is reasonable to expect periods of underperformance that could last 30 years or more, and that wouldn’t make the theory invalid.

But that lack of confidence on their part hasn’t stopped a number of investment firms from implementing this theory in their investment management process which presumably has them selling growth stocks and buying small and value stocks just waiting for the outperformance to arrive.

What else did those clients get aside from relatively lower returns compared to say, broad indexes? Well, if they were rebalancing a taxable account, they paid more in taxes just for the privilege. You see, rebalancing triggers the realization of capital gains, which are taxable. Make no mistake, taxes have a real impact on your long-term returns.

So, why bother? Is rebalancing wrong? No, rebalancing is an extremely important part of your portfolio management.

Take for instance Amazon. Let’s pretend that you owned Amazon back in the day and your portfolio had never been rebalanced. Now, in this example, effectively the majority of your money is now in Amazon (because it out performed everything else in your portfolio). 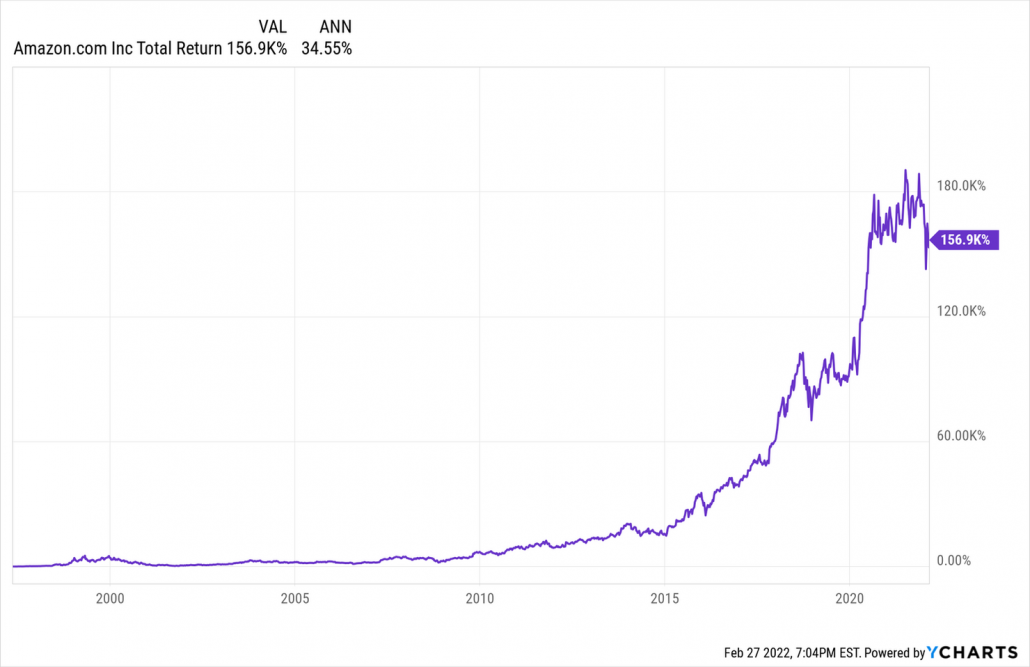 With a 34% annual return since inception, you might be willing to give it a shot, right?

Well, in reality, in order to get that return, look at the number and length of drawdowns from all-time highs that you would have had to endure. And remember, you are looking backwards at what happened. What if all of your retirement money were in Amazon in 2000? Could you have retired? 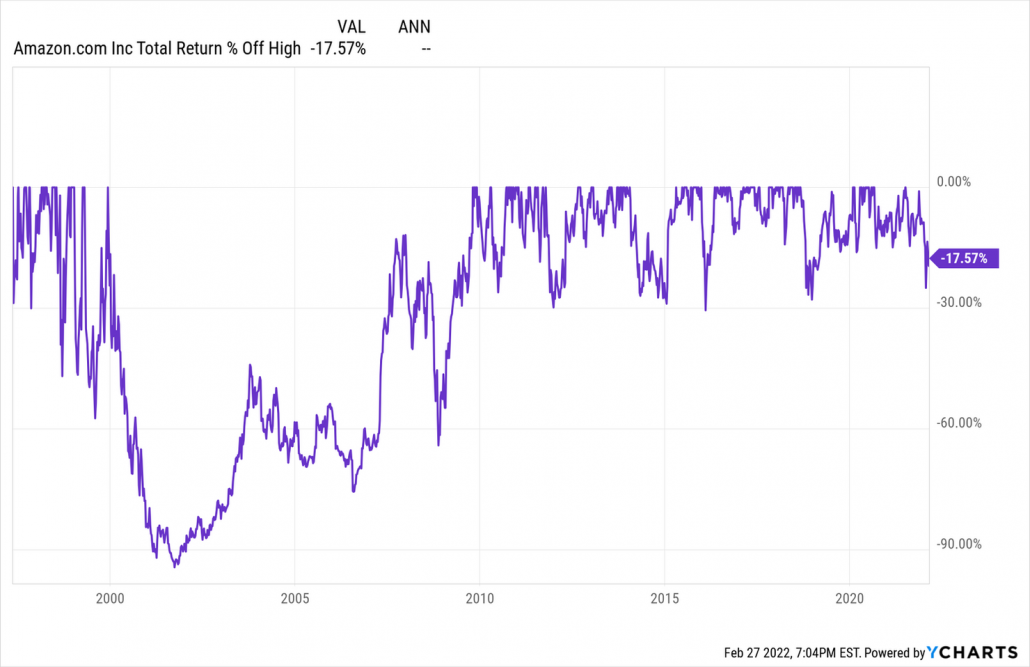 However, you need to make sure that rebalancing your portfolio is having the actual intended effect – maintaining your risk profile, while at the same time giving you the chance to achieve your financial goals.

Following a decades old academic model just because it has been around for a long time is a reason, but it isn’t a good enough reason.

Rebalancing between predetermined assets isn’t the right option as risk profiles of asset classes can and do change. Your process should have the ability to adapt as markets do, and this process should give you the best opportunity to keep your portfolio inline with your personal risk tolerance while keeping the taxes you pay as low as possible.

In short, rebalancing is important, but it is also important that it be done in the right way.

Commission (the “SEC”) located in Beachwood, Ohio. Wozny Capital Advisors, LLC operates as a DBA branch of Stratos Wealth Advisors, LLC. More information regarding Stratos may be found at www.stratoswealthadvisors.com. Registration with the SEC does not imply a certain level of skill or training. Public information concerning Stratos Wealth Advisors is available at https://www.adviserinfo.sec.gov. A copy of the Stratos’ current written disclosure Brochure discussing our advisory services and fees continues to remain available upon request and/or on this website at www.stratoswealthadvisors.com.

Stratos may only transact business in those states in which it is registered or qualifies for an exemption or exclusion from registration requirements. Stratos’ web site is limited to the dissemination of general information pertaining to its advisory services, together with access to additional investment-related information, publications, and links. Accordingly, the publication of Stratos’s website on the Internet should not be construed by any consumer and/or prospective client as Stratos’ solicitation to effect, or attempt to effect transactions in securities, or the rendering of personalized investment advice for compensation, over the Internet. Any subsequent, direct communication by Stratos with a prospective client shall be conducted by a representative that is either registered or qualifies for an exemption or exclusion from registration in the state where the prospective client resides. A copy of Stratos’ current written disclosure Brochure discussing Stratos business operations, services, and fees is available from Stratos upon written request. Stratos does not make any representations or warranties as to the accuracy, timeliness, suitability, completeness, or relevance of any information prepared by any unaffiliated third party, whether linked to Stratos’ web site or incorporated herein, and takes no responsibility therefore. All such information is provided solely for convenience purposes only and all users thereof should be guided accordingly.

Information presented on this site is for informational purposes only and does not intend to make an offer or solicitation for the sale or purchase of any product or security. Investments involve risk and unless otherwise stated, are not guaranteed. Be sure to first consult with a qualified financial advisor and/or tax professional before implementing any strategy discussed here. When you link to any of the websites provided here, you are leaving this website. The information and opinions contained in any of the material requested from this website are provided by third parties as well. They are for informational purposes only and are not a solicitation to buy or sell any product mentioned. We make no representation as to the completeness or accuracy of the information provided by these third party websites or third party materials.

Please remember that different types of investments involve varying degrees of risk, and there can be no assurance that the future performance of any specific investment or investment strategy (including those undertaken or recommended by Stratos Wealth Advisors, LLC), will be profitable or equal any historical performance level(s).

Certain portions of Stratos’ web site (i.e. newsletters, articles, commentaries, etc.) may contain a discussion of, and/or provide access to, Stratos (and those of other investment and non-investment professionals) positions and/or recommendations as of a specific prior date. Due to various factors, including changing market conditions, such discussion may no longer be reflective of current position(s) and/or recommendation(s). Moreover, no client or prospective client should assume that any such discussion serves as the receipt of, or a substitute for, personalized advice from Stratos, or from any other investment professional. Stratos Wealth Advisors, LLC is neither an attorney nor an accountant, and no portion of the web site content should be interpreted as legal, accounting or tax advice.

Each client and prospective client agrees, as a condition precedent to his/her/its access to Stratos’ web site, to release and hold harmless Stratos, its officers, directors, owners, employees and agents from any and all adverse consequences resulting from any of his/her/its actions and/or omissions which are independent of his/her/its receipt of personalized individual advice from Stratos.